Over 128 thousand Americans were killed or wounded in the Korean War between 1950 and 1953. Some do not realize that this was a mere five years after over one million Americans were either killed or wounded during WWII between 1941 and 1945. If you noticed that the Korean War took place just five years after WWII – it is an amazing statistic. As America entered The Vietnam War in the 1960’s and the subsequent upheaval that war caused on our society, you may understand now why the Korean War is sometimes referred to as the “forgotten war.” I am sure it is even more worthy to note that within the 128 thousand Americans wounded or killed in Korea, I am pretty sure that that number does not include the multitude of veterans who came home mentally scarred from what they witnessed on the battlefield. 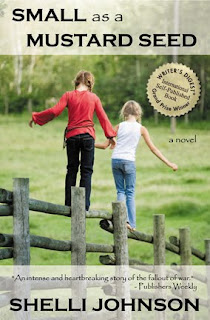 In Shelli Johnson’s “As Small as Mustard Seed,” we peer into the lives of a family that must deal with a veteran afflicted with the mental wounds of the Korean War.

I would like to start by saying that the title is very dear to me. It refers to the bible verse located in the book of Matthew, chapter 17, verse 20: "Because you have so little faith. I tell you the truth, if you have faith as small as a mustard seed, you can say to this mountain, 'Move from here to there' and it will move. Nothing will be impossible for you."

As a veteran of the military that served during another American war, I understand fully how one’s religious core can be shaken to the root after one sees what war can do to others in this world. The first question through a lot of people’s mind is, “How can a caring, all powerful God allow this to happen to us?” I am not a theologian, and I will not preach, but I have always found comfort in that verse from the book of Matthew.

What we see in Ann Marie and her family in “Small as a Mustard Seed” is a family I believe that has lost all faith in anything, including the family unit as a whole. This is prevalent in one of the most memorable scenes in the book where the family packs up decorations after Christmas and the baby Jesus is missing from the nativity scene. The family is almost asking permission to have faith – even if it is as small as a mustard seed.

The parable of Jesus implies that a mustard plant grows over time and becomes a large bush; in fact it is the largest among herbs. In turn, if one were to have faith in context of the size of a mustard seed, that seed has the potential to grow enormously starting from such a small point. Ann Marie’s family has a hard time even getting to the point of having even a small bit of faith, much less watching it grow.

Ann Marie even states that it was not God that answered her prayers in the horse barn, but instead a dimming light bulb that saved her life from the hands of her father. It may put things into context, though is it really coincidence, or is it just a lack of seeing God act in our lives, even at the worst moment no matter how small? I think Shelli places that question perfectly, and it reverberates through the entire story.

Adele’s insistence of keeping the family together and controlling Frank’s illness within the privacy of the family only proves their inability to place faith where it needs to be focused. By placing her faith in herself, Adele manages to rip the family apart even more, and as Jolene piles on the sin of her family and sacrifices herself in a futile attempt to make things better, you can come to the conclusion that this family does not get the point of faith, religion, Jesus, or even God at all, and it leads back to the ultimate, very misunderstanding of their father’s illness.

Mental illness has always been taboo. It is still not fully understood, and treatments only treat the symptoms and are never a cure. Historically, the more rational treatments of Post Traumatic Stress Disorder or Schizophrenia have only been around since the 1940’s and 50’s, and are still improving over time. So in milieu, Frank showing the signs of PTSD during the 60’s and into the 70’s shows a very much lack of perception. It is understandable that a family would pretend everything is ok, or wishing it will just disappear, dealing with the illness internally – especially since they live in a small town, and everyone talks about everything.

“Small as a Mustard Seed,” in my opinion, is an important book. It embarks on shedding light on a very prevalent illness, especially since there are thousands of Americans coming back from war even as I type, and I am sure no doubt may carry some of the same demons Frank does. It also points out the misunderstanding of where faith lies in our lives and the real point of why we suffer.

What I also appreciated with Shelli is that she writes to a certain point and doesn’t leap over a line that a lot of authors would. Her dramatic scenes are dramatic, but they do not leave you with a bad taste in your mouth. After reading the book, I especially thought that young adults and even teenagers would learn a lot from this story.

One thing that I would have really liked Shelli to have done is put a little more historical background in the novel. Artistically, I can see that what was happening to the family was happening to the family and any outside storyline might hamper on her tale. She is definitely trying to isolate these people as much as possible. I don’t see this as a problem though. If more of the historical background and context was encompassed in the book, this may have become the dark side of Forrest Gump. In hindsight it is Ann Marie’s thoughts about her family in the past, so it is understandable from a practical point that she would not bring up anything happening on the outside. I missed some of the historical telling that would have brought more insight to the family’s plight on a larger scale. I guess I am a sucker for Michael Crichton’s “The Great Train Robbery” in that sense.

“Small as a Mustard Seed” is solidly written and very descriptive. I enjoyed this book a lot, and yes I got choked up a couple of times. Again, as a veteran I am very thankful to artists who tackle on such difficult subjects that affect the lives of servicemen and servicewomen.

Will Ann Marie or her family find what they are looking for? You'll have to read to find out.

If you are a veteran or someone you know is a veteran and suffers from Post Traumatic Stress Disorder, please contact your local VA, or go to http://www.ptsd.va.gov/ to seek assistance. You are not alone, and your family is not either.

"Small as a Mustard Seed" by Shelli Johnson

Click to buy the eBook here: Small as a Mustard Seed

or at the iBooks store.

If you are an independent author and would like an honest review of your book, let me know. I will be happy to purchase your eBook and post the review on my blog. I am a programmer by day, and writer of Christian fantasy for kids 10 and up. My book is called "The Mahogany Door" and can be purchased where most eBooks can be bought. It also has an original music soundtrack that can be heard here: The Mahogany Door and bought from Amazon MP3, iTunes, WalMart, or anywhere else you pick up digital music. I can be reached at JMark.Boliek@gmail.com if you would like me to review your book.
Posted by JMarkBoliek at 6:14 PM

Promote Your Page Too